Limit Hosts for your Events

Convention organizers can limit those they wish to allow to volunteer to host events, rather than just open an event's hosting to anyone.  Normally when you set an Event to "claimable", it means that in the view for that event, an "I'll Host This Event" will appear to anyone, allowing them to volunteer to host. 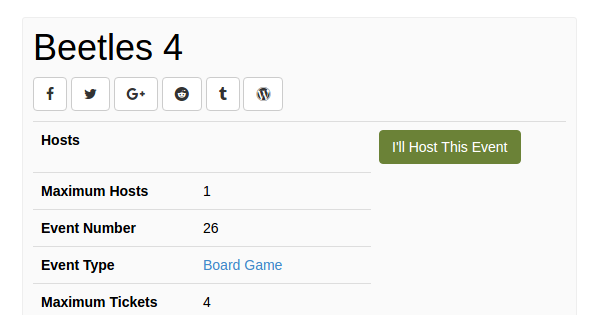 Restriction of event volunteers is done in the Event Type area of Convention Tools => Scheduling.

Once in Event Types, click the Edit button for the event type for which you want to add specific allowed volunteers.  In the edit view, the field which lets you do this is Limit volunteers to specific users?

Choose "Yes" in Limit volunteers to specific users.  A user selection widget titled Allowed Volunteers will appear below the select box.  The number of current allowed volunteers appears next to the title.  Enter some search text into the box to show users.  (The text you enter must match from the start of a user's name or email.  Note that email addresses might not be fully displayed, for privacy reasons.)  Matching users will appear in a list with Choose buttons by their names.  Click the Choose button for a user to add that user to the allowed volunteers.

If you add more than a single user, a Remove All button will appear.  This button will remove all the allowed volunteers you have added.

You can add as many allowed volunteers as you need.  If you add more than 10 allowed volunteers, the volunteer list will paginate.  As allowed volunteers appear in the list alphabetically by name, you might not see the user you've just added in the page you are viewing.  You will know the user is added from the green success alert box that appears (see above image).  If you try to add a user who is already in the list, you will receive a message to that effect.

If you change the setting in Limit volunteers to specific users? from Yes back to No, all events of that type, which can be claimed by volunteers, will become claimable by any user.